Death on a Winter Stroll by Francine Mathews 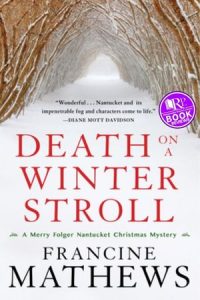 Death on a Winter Stroll by Francine Mathews has all the ingredients for a great mystery. This is the seventh book in A Merry Folger Nantucket Mystery Book Series. The book contains politics, Hollywood and of course murder.The main protagonists are Nantucket Police Chief Meredith Folger and her sidekick Detective Howie Seitz. The plot is of course a murder mystery involving a woman, artist Blyth Fitzpatrick, who has come back to Nantucket, no one knows she is there except her estranged son, Ansel, finds her. She is an artist who because she is dying has come back just to be defiant against her ex-husband, The house she came back to had actually been in her family, but her ex decided to take it from her in their divorce and let it go into ruin. When she is murdered, the suspects include her ex and son.A lead actress who along with her fellow actors are on Nantucket to film a tv show. Lots of people could want her dead and it is up to Chief Merry and Howie to find the murderer. There are a lot of tourists there as it is the time of year for the Winter Stroll, a time before the holidays that is very popular on Nantucket where the streets are festive in preparation for the holidays.When the husband of the producer of the tv series goes missing and found murdered, Merry and Howie now have to figure out the connection of the three dead people. Two of them were killed in the same manner, shot with a shotgun. It becomes apparent that the people involved are good at keeping secrets.This is a character driven novel, in that the reader learns about all the Hollywood people, the US Secretary of State, who is the wife of the ex-husband of one of the victims. They each have their own story to tell. Some readers may object to the language in the book, I did not think it was enough to deter me from reading the book. It is a part of life, people swear. There are a few triggers that may offend or upset some readers. Those being drug abuse, eating disorders, suicide.That said, I really enjoyed this book. I had had trouble getting the book on my Kindle but once I did, I had to read it. I love a good murder mystery, I liked most of the characters and it was a pretty fast read. I think if you are a fan of Francine Mathews, then you really need to read this installment. This is the first I have actually read by this author so I will definitely be reading more.I give it 5 stars!